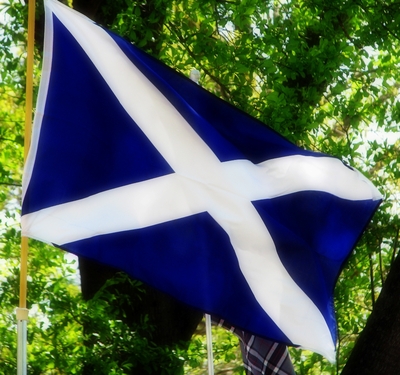 The Scottish flag flew high above many of the vendor tents. 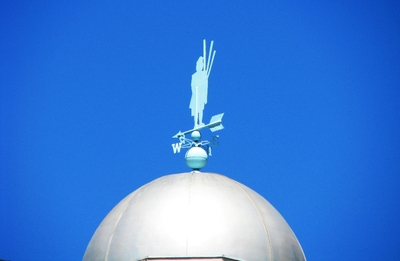 This school had some serious Scottish pride.  Even its weathermane held a bagpiper.

I wonder if this is the man who started it all?

Doesn’t this guy look like he is giving a lecture before a football game?  It’s just a bag piping competition coach.  It’s ok.  Calm down!

Pipers!  See, this school has a bagpipers competition.  People come from all over the U.S. for it.  I thought it was pretty cool to see group competitors in their own colors and uniforms competiting! 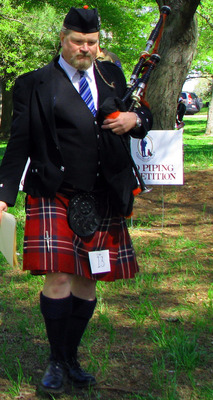 Unlike our sheep herding demonstrator, these guys are wearing socks that ARE the right length!  The bag pipers were in the more modern day traditional formal kilts.  However, there were others in the older traditional style of dressed up.  Incidentally, these are my favorite for some unexplained reason.

The bag on the front is called a sporran.  It is kind of a….ummmm….not that it isn’t manly….but it’s a purse.

See how some of them have daggers stuck in their socks?  There were quite a few weapons roaming around that day!  This photo actually reminded me that this event should be held later in the year…or they should hand out sunglasses for all the manly white legs you see!!!

As the day went on we finally managed to find the sporting events.  I could not for the life of me figure out which event this really was.  The closest thing I could find is that maybe this is a variation of a sheaf toss but without using a pitchfork.  There was a pitchfork in the ground nearby. so maybe this was it.  I don’t know.

The object of the sport is to take a ball on a chain and throw it up and over a bar above your head.  Kind of like pole vaulting, but instead you throw this heavy ball over.  After each successful round the pole is raised.

This guy was getting ready for his toss.  It’s the only reason I took this photo…I swear. (and you shouldn’t look at his arm muscles, because seriously, they are hideous and awful to look at.  Really.)

They actually swing the ball inbetween their legs before they start the upwards toss.

See?  It’s not that different from football except this guy is cheating and wearing stuff under his kilt!  BOOOOOO!!!!!!

Then there is a collective gasp from the crowd as we waited to see if this huge ball went over the pole or landed on his head. 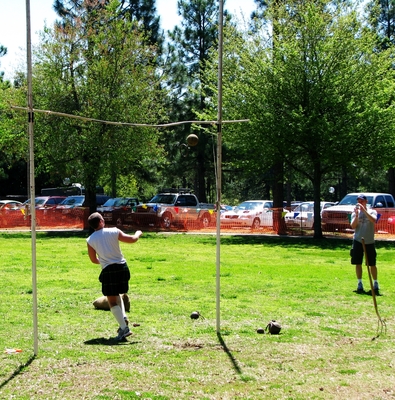 I think he missed.

So, after looking at all of these pictures that I am sure you are tired of by now, I just have one question for you that I saw on a bumper sticker:

Next up in the photo diary:

Why Jeremy and John cannot fly a kite with their mouths closed.  You’ll get the exclusive right here.

I am a 37 -year-old woman from Arkansas who is happily married to a Scottish immigrant aka “the hubby” “the hubs” or if I am calling him directly “YO YOU!” We’ve been married for 3 years and it’s been a crazy ride, and unfortunately our finances have been beat to death in the last few years. We have two dogs and a cat, no kids. The Blog- What’ll you find: Financial Information as we try to become debt free My attempts at working and trying to maintain a home to the standards I like My adventures in learning how to sew Arts and craft projects Funny tidbits from my life including living with a Scottish person, the dogs, and other oddball things that happen to me. What you won’t find: Much on children. I don’t have kids and I can’t have kids. Recipes- I don’t mind cooking, but unless it’s something really special, don’t come here looking for the weekly recipe! You won’t find it- unless you ask my husband. If you’re interested in what you see, please follow me on Facebook or sign up for emails! Most of all, leave a comment or ask a question! I am always happy to hear from you!

10 thoughts on “Final Photos from the Scottish Festival”